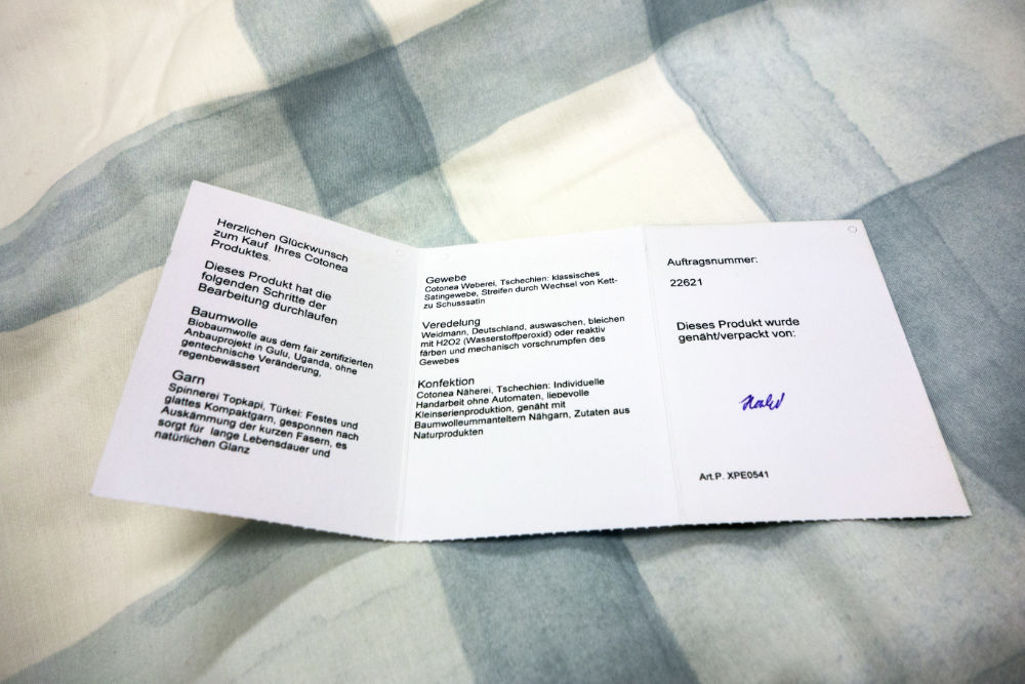 The Cotonea product pass provides information on all production steps

Although the organic textile manufacturer Cotonea usually trusts in IVN Best, the seal of quality with the highest standards worldwide, the company also uses GOTS for its products. "The achievements of the Global Organic Textile Standard are fundamentally remarkable and significant. The guidelines and criteria it specifies for awarding its seal are among the most meaningful and ground-breaking. For example, GOTS, like IVN Best, provides double security through its positive list. The positive list defines which chemicals are approved and also defines residue controls and limit values", explains CEO Roland Stelzer, who has been working on the development of sustainable textiles for 25 years at the traditional company and Cotonea manufacturer Elmer & Zweifel.

"Nobody, who doesn't know his production chain inside and out, is 100% safe from fraud" Stelzer further explains. "Certifiers cannot be on site at all time." According to Stelzer the increased demand for organically produced textiles increases the likelihood of fraud. This is even more the case if the scam happens at the beginning of a long chain of production steps making it harder to track. Therefore, it is important to know one's own chain of production and its weak points well and to implement additional inspections.

Cotonea is not affected: organic cotton only from its own cultivation projects

In Kyrgyzstan and Uganda, Cotonea has helped to set up organic cultivation projects and sources the organic cotton from there for the further production steps. For this reason, Cotonea is not affected by the fraud now exposed in India. The company knows all the processing companies along the production chain personally: from ginning and fibre production to yarn spinning, yarn finishing, production of large textile pieces / weaving / knitting, finishing of large textile pieces to the manufacture of products. But Cotonea does not rely on this alone.

Own samples and transparency

"We send random samples of our goods to the laboratory ourselves and check whether work has been done according to the standards, i.e. in compliance with the guidelines according to which the seal we are aiming for is awarded," says Susanne Günter, who is responsible for quality assurance and certification at Cotonea. "We do this especially when it could be critical - even if that means we can't use a batch."

"We focus on absolute transparency down to the last detail", explains Roland Stelzer. "Our communication is not only about sustainability in general, but specifically about many important sub-aspects such as organic farming, freedom from genetically modified organisms, regenerative energy, longevity of the products through high quality - the list goes on and on. And we were the first textile chain in the world certified as being completely fair."

A product passport on each product makes the entire production process visible and transparent for consumers, including all suppliers and companies involved. A sustainability report on the website provides, among other things, insights into the production chain. Stelzer advises consumers, buyers and labels to not only pay attention to the seals, but also to look closely at other aspects. One possibility is to ask the direct supplier about his own suppliers. The way a company works and is able and willing to provide information in an open, transparent, committed, and comprehensible manner says more than advertising phrases.